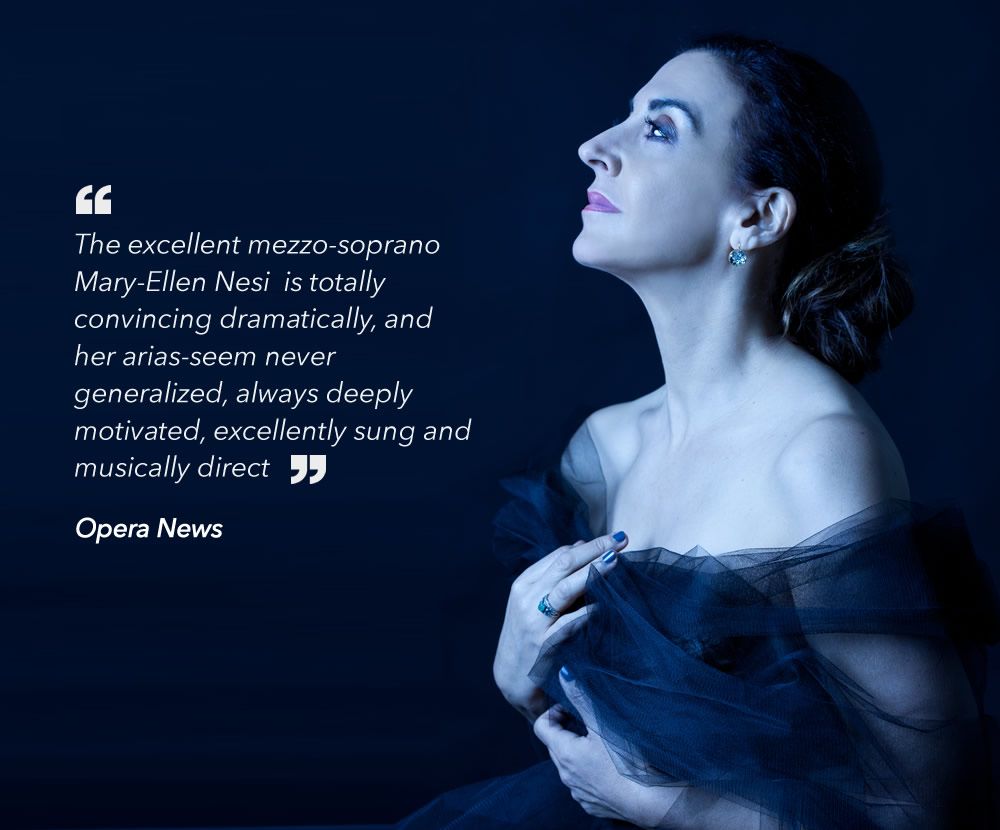 “Not the least impressive aspect of the recital is Nesi’s ability to tailor her voice to suit music covering a century of operatic development, finding a rich vein of understated lyricism in the earliest music, Nesi brings a formidable coloratura technique, including precisely articulated passagework and tasteful ornamentation.

*About the aria of Cherubini’s Medea: “Nesi’s performance is something of a vocal and dramatic tour de force, employing a gloriously free tone across an unbroken range that includes powerful chest notes and dramatic intensity alternated with more intimate tender expressions of concern of her children…”

“Nesi’s is a bold instrument – big-boned and handsome – which is at its best in her Baroque home territory, showcasing both its power and agility”

Canadian-Greek mezzo-soprano Mary-Ellen Nesi has firmly established herself in the world of baroque opera. Already she has made a number of superb recordings including operas of Handel and Gluck. On this new SACD she turns her attention to tragic heroines based on Greek tragedies . In addition to Handel and Gluck, we have three arias by Porpora as well as music of lesser-known composers: Andrea Stefano Fiore, Luigi Cherubini, Johann Adolf Hesse, and Giovanni Paisiello. Many of these never have been recorded before. Nesi has the technique for this florid writing, and her sound is consistently beautiful. She is given perfect accompaniment by the period-instrument group Armonia Atenea directed by George Petrou, and the MDG engineers have provided a most realistic audio picture. Complete texts and translations are provided.

“Mezzo-soprano Mary-Ellen Nesi’s artistry, commitment and sure sense of style and drama always hit the mark. Taking the soprano role of the opposing ruler, Arminio, she brings power and vibrancy to dramatic moments, with majestic sound and handsome phrasing, particularly at the opera’s high point, “Parto, ti lascio.” Here, she shapes long, expressive lines with inventive ornaments and magnificent high notes both forte and piano”

Arianna in Creta concert in Halle:

“Mary-Ellen Nesi launched into “Mirami” with effortless ease, demonstrating consistent accuracy, flexibility and attractive tone as Tauride, spinning off a great cadenza at the end of “Qual leon”

“In this performance of Germanico in Germania, mezzo-soprano Mary-Ellen Nesi sings Caffarelli’s part with swagger that suggests that the castrato’s boasts that he rather than Farinelli was Porpora’s greatest protégé were not unfounded. From Arminio’s first entrance in Act One, Nesi makes the valiant warrior a dangerous adversary for Rome and Germanico, presenting his defiance with unshakably firm vocalism. She commands the tessitura with few of the shortcomings that mar other singers’ performances of similar music.

The communicative power of Nesi’s voicing of ‘A lei, che il mondo adora’ discloses the rewards of her artistic shrewdness, but here and in the riveting accompagnato scene with Cecina in Act Two it is above all the quality of the voice that compels admiration. The fiendish divisions in ‘Empi, se mai disciolgo’ are dispatched with galvanizing precision at a brisk tempo, elevating the tension that erupts in her nuanced, radiantly beautiful account of ‘Parto, ti lascio, o cara.’ In Nesi’s performance, the character’s integrity is always apparent in the emotionally volatile terzetto with Rosmonda and Germanico. The mezzo-soprano wields such histrionic authority in her articulation of ‘Nemica del valor barbara sorte!’ that this scene in Act Three could veritably be an opera in its own right. The tenderness of this Arminio’s discourse with his wife in the duetto with Rosmonda, ‘Se viver non poss’io,’ is endearing, and, in the opera’s final scene, the accompagnato ‘Vindice Dea’ draws from Nesi declamation of poetic potency. Nesi has ever been a noteworthy interpreter of music originally composed for castrati, but her singing on these discs confirms that her work is one of the most cogent vindications of the rejuvenation of this repertoire”.

“Mary-Ellen Nesi is his equal in swaggering brilliance, using the bright blade in her mezzo to thrilling effect in Arminio’s vehement denunciations of Germanico . Invariably expressive with words, Nesi effectively softens her tone for the touching aria of parting in Act 2, one of the score’s jewels.”

“Written originally for Farinelli, the work obviously suited Mary-Ellen Nesi’s range very well. Hers is a rich, full voice and her legato phrases and an unaccompanied passage were a particular joy”

Mary-Ellen Nesi’s Antiope is powerful and commanding: she is wonderful to watch in her angrier arias, such as Con aspetto lusinghiero or the splendidly furious Scenderò, volerò, griderò. Coming on in her red dress, full of vengeance, she’s a sight to behold…

“Mary-Ellen Nesi’s unleashing of the pent-up anger at Cosroe in a chain of accompanied recitatives culminates thrillingly with the enraged ‘Che furia, che mostro"

“Mary-Ellen Nesi as Armida displayed interpretive genius in full voice in her first appearances, with menacing flourishes and agile vocal fireworks - she even seemed to breathe without interrupting the broadcast in "Combatti da forte". Her performance, however, suffered as the night progressed to a somewhat stiff and hard "Fatto e Giove" ending”

“Mary-Ellen Nesi, whose Sextus – fiery, headstrong and thrillingly sung – is surely the finest on disc”

"…In the castrato role of Oreste, Canadian-born mezzo Mary Ellen Nesi is a real find. The voice is expressive and handsome, and she has no trouble with the rapid passagework or with Handel's smoother lines that require a true legato. She is a singer to keep an eye on: even in our chock-full-of-good-mezzos time, she's worth hearing..."

"Vocally the performance is nearly dominated by the magnificent Teseo of mezzo Mary-Ellen Nesi. On this evidence, I can only express incredulity that Nesi has to date not hit the headlines in a very big way. Not only has the voice itself a full, lustrous quality, but it is superbly controlled across the range…while also capable of producing thrillingly accurate passaggi in bravura passages. The reprise of “Sdegnata sei” starts with an exquisite messa di voce, while throughout Nesi treats us to perfectly executed trills, and ornamentation of repeats that never transgress style or taste"

"Mary Ellen Nesi, singing the male part of the lover Andronico, wins over the public from the first note, receiving repeated applause for her warm mezzo voice, a register that strikes a chord in the heart of the listener. The sound flows absolutely naturally; she abandons herself to Handel's cadences and creates a living character with whom the audience can identify"

"Mary Ellen Nesi's performance is gentle, flexible, delicate, and with an inner light and enchanting timbre, turning the character of Andronico almost into the main role"

"..The pick of them is the Canadian-born mezzo Mary-Ellen Nesi in the title role, equal to all the technical and musical demands of numbers written for two of Handel’s most outstanding virtuosos"

"…The soloists are of a good standard, but in the title-role the mezzo-soprano Mary-Ellen Nesi offers a really interesting and vocally consistent performance"